Heading to Tirana from Saranda was easy. The ticketing office is just behind the ruins near Friendship Park. There are no signs, but it’s on the ground floor of one of those buildings behind the ruins. A one way journey to Tirana costs 1300 lekë (about 13 USD). Since it’s a popular route, there are 10 buses leaving each day. The first one leaves at 5 AM, and the last one leaves at 10 PM. The buses are just parked on the other side of the ruins. I managed to buy a ticket for the 2 PM bus even though I got to the ticketing office at past 1 PM. They told me the trip takes about 4 hours. It actually took more than 6 hours.

Buses from Saranda would arrive at the Southern Bus Station which is about a mile from the city center. Buses arriving from and heading to southern destinations in Albania are found here. You could easily take a local bus heading to the city center for only 40 lekë (the standard bus fare within the city). I chose to do a leisurely walk and it took me 40 minutes to reach the hostel.

There are actually 5 different bus stations in Tirana so you’d have to do a bit of research to determine which bus station you’d need to go to. Buses heading to the northern part of the country (Shkoder, Kruja, Puka etc.) are in one bus station. Those heading to the southern part of the country (Saranda, Berat, Himara, Gjirokaster, Vlore) are in another one. Those heading to the southeast (Pogradec, Permet, Korce etc.) are in a different one. Those heading to other countries like Montenegro and Greece are in yet another one. There’s also a separate bus terminal for shuttle buses heading to the airport. The hostel where I stayed at provides the locations of these different bus stations on their official website. They also have bus schedules posted at the reception area. The staff were very knowledgeable and helpful. They would explain to you in detail how to get to each bus station using public transport so you won’t have to take taxis. 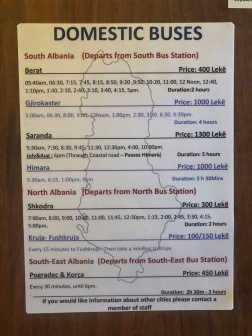 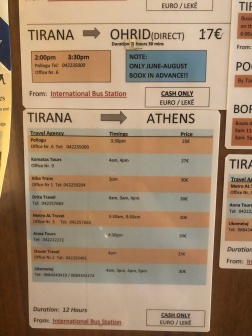 Before I arrived in Albania, I’ve been hearing that it’s so hard to travel within the country because the transport system isn’t tourist friendly. Maybe it’s because I’ve been to countries where the transport system is worse, but I didn’t find it difficult at all. You just need to know where to go because there are different bus stops/ terminals depending on your destination. And yeah, a lot of times buses are late, but they pretty much stick to their schedule. If you get lost, it’s not really a problem because locals are very eager to help. Even if they don’t speak a word of English, just mention the name of the place you’re going to— like Shkodër/ Shkodra. On local city buses, if they’re gonna pass by the bus station that you need to go to, they’ll tell you to hop on board and they will tell you exactly where to get off. If they won’t be passing through that bus station, they would simply say no. I’ve been around the city using these local buses without knowing a word of Albanian (except for faleminderit, which means thank you). All I had to do was mention my destination.

The entrance to the Northern bus Station

The southeastern bus station: more like a parking lot.

Which hostel did I stay at? Everyone I’ve met who has been to Tirana was highly recommending Trip’N’Hostel so I made it a point to stay there. It’s almost always full though, so I suggest booking a couple of days in advance. I arrived late, and there were about 5 people waiting if anyone who had a reservation wouldn’t show up. This must be one heck of a hostel if people were willing to wait instead of just staying in another hostel! To me, what sets it apart is the atmosphere. It’s not a huge hostel so it’s easy to get to know people. If you’re traveling alone, the staff will make sure that you won’t be alone for long. They will introduce you to other guests so it’s incredibly easy to make new friends even if you’re shy, and even if people already seemed to be grouped into certain cliques. 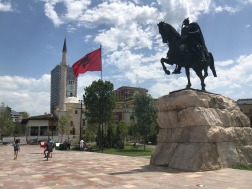 They also do their own walking tours twice daily— one in the morning and another one late in the afternoon. I’d highly recommend joining these walking tours because in about 3 hours you’ll be able to see most of the main attractions in the city. It would save a lot of time if you don’t plan on staying in the city for long. The tour starts at the Skanderbeg Square, the main plaza in Tirana. This is the ideal place to start since a number of attractions are clustered here: The National Historic Museum, the Clock Tower, the Opera House, and the Et’hem Bey Mosque. 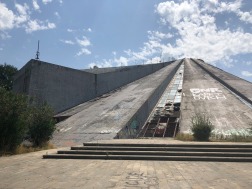 For me, the one that stood out most was the “Pyramid“. It used to be the Enver Hoxha Museum which served as a sort of tribute to Enver Hoxha, the longtime communist leader of Albania. It ceased to be a museum after the fall of Communism in 1991 and it served various purposes before it reached its current dilapidated state. It’s a really eye catching structure. It would be great if they could clean it up and restore it to its former glory. I’ve heard there are plans to just demolish it. Personally, I think it would be better for the city to just restore it, seeing how it’s such a popular attraction for tourists. 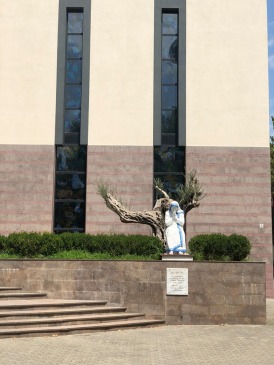 I’m catholic, so I’ve heard of Mother Teresa and I know all about her works. It’s funny that I didn’t know she was from Albania. Albanians are very proud of her, and the St. Paul’s Cathedral in Tirana commemorates her and the late Pope John Paul II. Fun fact: the international airport in Tirana (the Tirana International Airport Nënë Tereza) is actually named after her.

The Great Mosque of Tirana

The Great Mosque of Tirana

Right smack in the city center is a soon to be attraction— soon to be, because it’s not yet open to the public. They expect it to be open by the end of the year. I’m talking about the Great Mosque of Tirana. You definitely won’t miss it because it’s massive. In fact, it’s gonna be the largest mosque in the Balkans once it’s finished. If you’ve ever been to Turkey, you’d notice that it looks similar to the mosques in that country. It doesn’t look like any of the mosques in Albania. This is because the Turkish government is fully funding the construction of the mosque, so they were also the ones who designed it. This makes this Mosque controversial. Since majority of the people in Tirana are Muslims, they feel that it’s their government’s duty to build a mosque for them. I see their point. Having a foreign government build a place of worship for your own people does seem kinda odd.

Throughout the city you’d notice lots of bunkers. I’ve also seen some of these in other parts of the country, but there seemed to be more of these in the capital. These were built all over the country during the time of Enver Hoxha for protection, but these were never used for their intended purpose. After his death, this so called “bunkerization” program was stopped. These days these bunkers serve as bitter reminders of all the money wasted for what turned out to be a useless endeavor. They also serve as unique tourist attractions though, and there are museums featuring these bunkers. Those bunkers out in public aren’t really well maintained though. In Tirana especially, it seems that these are used as makeshift toilets, evident from the pungent smell of urine emanating from them. 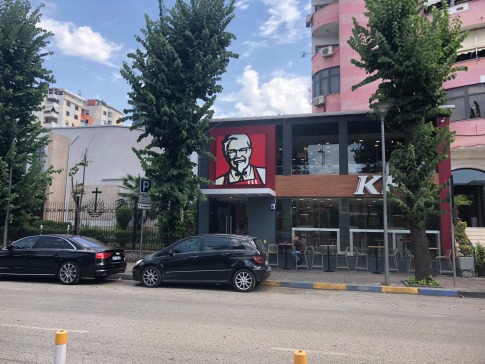 Throughout the walking tour you’d come across several amusing attractions. One would be the boulevard named after George W. Bush. This street was actually renamed when he visited the country, to show their appreciation for the first sitting US president to visit Albania. Also watch out for the very first Kentucky Fried Chicken in the country lol. Apparently it’s the very first international fast food chain in Albania so it’s somewhat considered an attraction. heh. 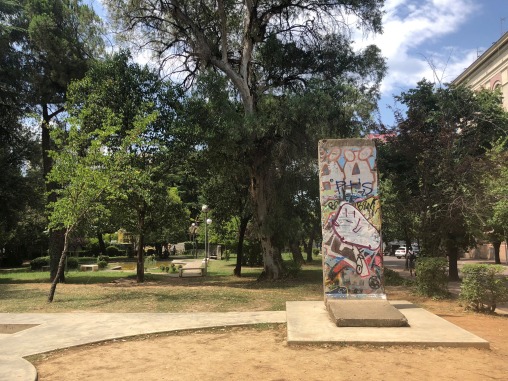 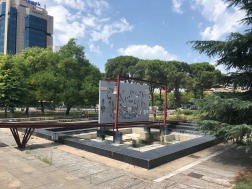 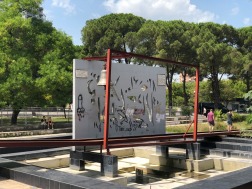 Aside from the graffiti at the pyramid, numerous street art can be found scattered in the city. What’s with all the dick graffiti though? lol. Not that it’s unique to Tirana. Come to think of it, I’ve probably seen dick graffiti in every country I’ve visited. It seems to be the universal symbol that could possibly unite us all lol. 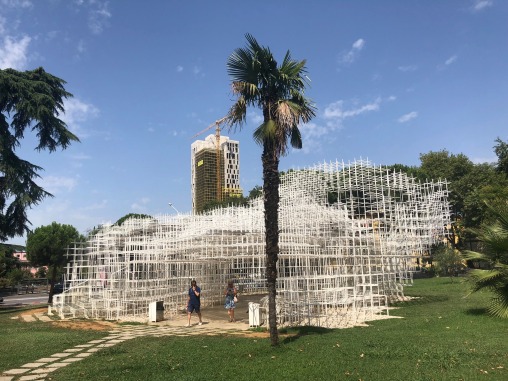 “The Cloud”— originally from London 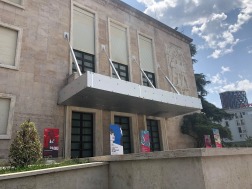 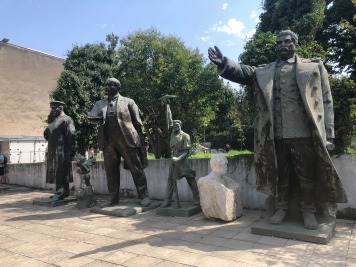 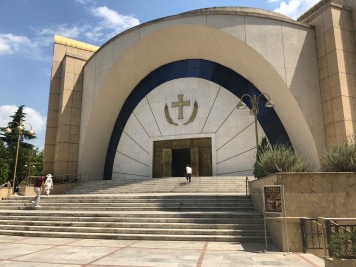 Nightlife in Tirana is pretty good. The bars and clubs are on par with the top clubs in central Europe. I noticed that the locals would really dress to impress. We seemed a bit out of place with our ordinary backpacker clothes. One bar was really strict with their dress code, they wouldn’t let anyone in our group in! You can get away with wearing anything elsewhere in Albania (heck i was able to get inside one club in Saranda wearing a tank top, swim shorts, and flip flops). In Tirana, if you wanna check out the nightlife you have to dress properly. One more thing— for solo travelers who want to meet locals: in most places in Albania, Tinder is practically useless. In Tirana though, it’s alive and well. 😉

I’d say I liked Tirana. I’m not a fan of capital cities in general but it had a couple of unique attractions that piqued my interest. The fact that the locals were incredibly warm and friendly surely was a factor. I’m glad I liked it because I had to go back to the city several times. A lot of towns have no direct connections with each other, but there are always buses heading to Tirana since it’s the capital. If you don’t rent a car, you’d always end up going back like I did. I grew quite fond of this city, so I didn’t mind going back again and again.

3 thoughts on “Traveling through Tirana”