There’s so much to see in Jerusalem. However, nearby areas have a lot to offer too, making it the perfect base to do many day trips. This is one reason why many travelers in Israel spend most of their time here: its location makes it a good place to explore the rest of the country. The most popular day trips are the ones to the Dead Sea and Masada. After two days of exploring Jerusalem, I decided to check out both places.

The cheapest way to get to both places is via public transport. Several buses are running daily, and the schedule can be seen on the Egged website. From the Jerusalem Central Bus Station, you just need to hop on the 486 bus which passes by several stops along the Dead Sea and Masada. The fare from Jerusalem would depend on you destination.

The nearest beach by the Dead Sea is Kalya/ Kalia Beach. It’s also one of the most popular due to its proximity to Jerusalem— it only takes 30-40 minutes to get there and it only costs 21.50 Shekels. Kalia Beach is a great place to spend the day, but you’d have to pay 59 Shekels to enter. If you’re on a tight budget there’s a free beach farther south along the Dead Sea, so I’d recommend heading there instead. If you want to go to Masada after Kalia Beach, it would cost another 27 Shekels from there.

The cheaper alternative would be to head to Masada first then go to Ein Bokek Beach afterward. This is the free beach and it’s farther along down south. From the Jerusalem Central Bus Station to Masada, it costs 37.50 Shekels. Then from Masada to Ein Bokek, it would cost another 16 Shekels. Though the total bus fare would be a little more expensive compared to the one that combines Kalia Beach and Masada, it’s still going to be a whole lot cheaper overall since you don’t have to pay any entrance fee in Ein Bokek.

If you just want to check out the Dead Sea and you’re not interested in Masada, it also costs 37.50 Shekels to get to Ein Bokek from Jerusalem. I guess it’s because Masada and Ein Bokek are close to each other. It only takes about 15 minutes to travel between these two destinations by public bus.

Now after doing all this research I still decided on signing up for the Dead Sea- Masada tour that was offered by the hostel. It costs a whopping 105 USD, and normally I would have balked at it but based on my experience, one of the best ways to make friends with other people staying at the hostel would be to join tours that they offer. It turned out to be a big mistake because the hostel doesn’t run their own tour. They just sign up their guests with a huge tour operator. All in all there were 4 huge tour buses and the people who signed up comprised of retirees and families. I didn’t make new friends but overall I had a great day. Also I didn’t have to worry about entrance fees since everything was included in the price except for lunch. 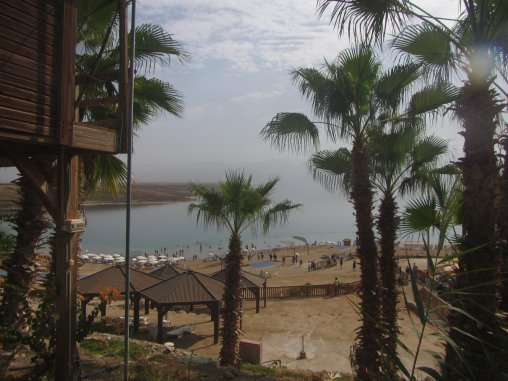 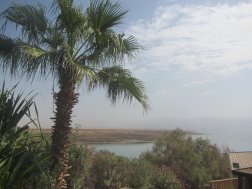 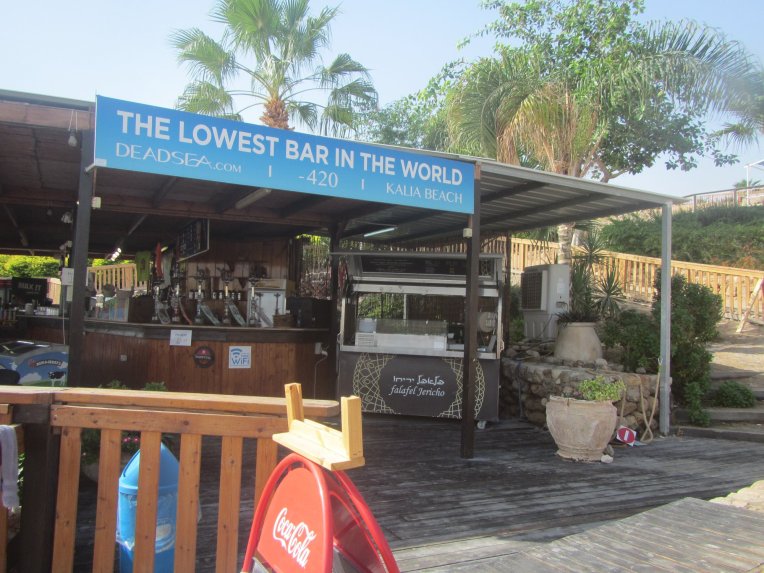 The first stop was Kalia Beach. I’ve always wanted to experience floating in the Dead Sea and the experience did not disappoint. I totally got a kick out of it, it was a one of a kind experience. Everyone by the shore were applying mud all over their bodies so I decided to join the fun. To be honest the mud stank and I didn’t like how it felt on my skin, but I guess it’s just something everyone has to do in the Dead Sea. An added attraction is the so called “Lowest Bar in the World“. Drinks were pricey, but everything is expensive in Israel so I wouldn’t single it out. The facilities in Kalia Beach were top notch, I’d say it’s worth the 59 Shekel entrance fee. I didn’t go to Ein Bokek but some folks I met said the facilities weren’t too clean over there. Well that’s to be expected since it’s a free beach. We only had less than 90 minutes to spare however, which is one reason why I wouldn’t recommend doing this tour. I only spent about 30 minutes floating in the Dead Sea since I had to shower to rinse off all the mud and slimy water. I would have wanted to spend more time there. 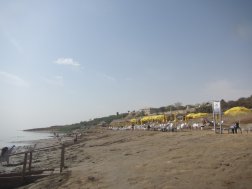 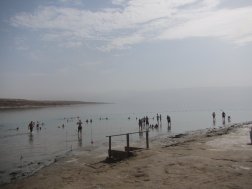 So we spent less than 90 minutes in Kalia Beach. We left at 12 noon and arrived in Masada before 12:30 PM. Masada is an ancient fortress built by Herod the Great. It’s located on top of a plateau so it offers spectacular views of the Dead Sea. It is notable for the mass suicide that occurred in this site at the end of the first Jewish- Roman War.  If you’re heading here on your own, the entrance costs 27 Shekels. Heading up, there are two options. The first one is to hike up, and you’d have to pay an additional 29 Shekels.  The trail was closed when we visited though due to the weather. I guess it was too hot to hike up. So we were left with one option which was to take the cable car. A one way ticket costs 27 Shekels, but since the pathway was closed there was no other way to get back down so we were given round trip tickets which costs 45 Shekels if you’re not part of a tour group. We had a one hour lunch break before the tour started. Masada was okay I guess, but coming from Egypt, I was really underwhelmed. The structures were mostly indistinct, on some parts it just looked like a bunch of rocks. The short film that was shown before we headed up helped a lot though. Knowing the history of the place made it a lot more interesting. If they didn’t show that film I wouldn’t have appreciated what I was looking at. At around 5 PM, we were on our way back to Jerusalem. 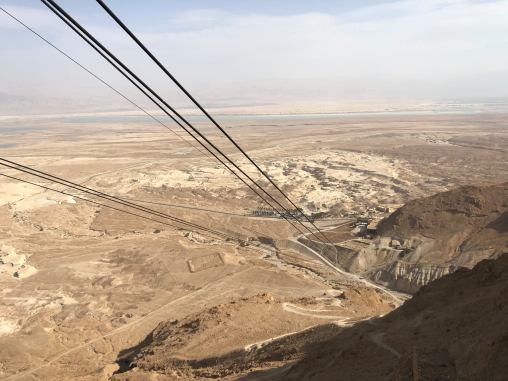 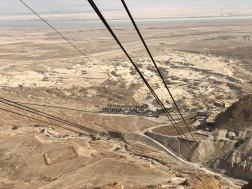 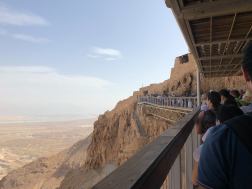 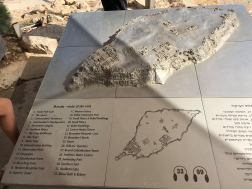 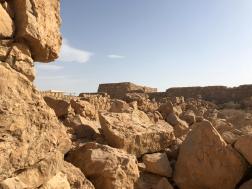 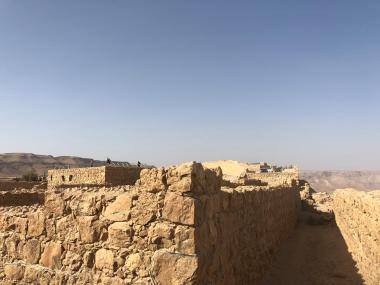 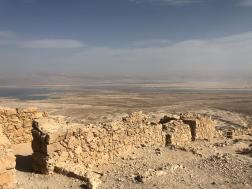 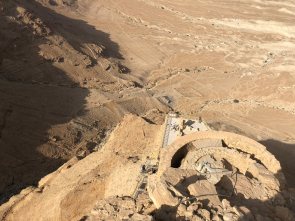 So basically we spent most of the day in Masada. When I signed up for the tour I thought the time would be equally divided for both the Dead Sea and Masada. This tour was basically a Masada tour with a taste of the Dead Sea. If you’re more interested in the Dead Sea, then I’d suggest skipping this combination tour. Many companies offer it and they have the exact same itinerary. Public transport is really efficient in Israel so it’s easy to get anywhere. It would be way cheaper too. For solo travelers, I’d still recommend joining tours offered by hostels but only if the hostels run their own tours. If they’ll just sign you up with a bigger group I’d say just go on your own. I also think 105 USD for this tour is ridiculously overpriced. Yeah I get it, one has to pay for convenience, and having a legitimate tour guide the entire time did sweeten the deal. But I don’t think it was special enough to justify that hefty price tag. 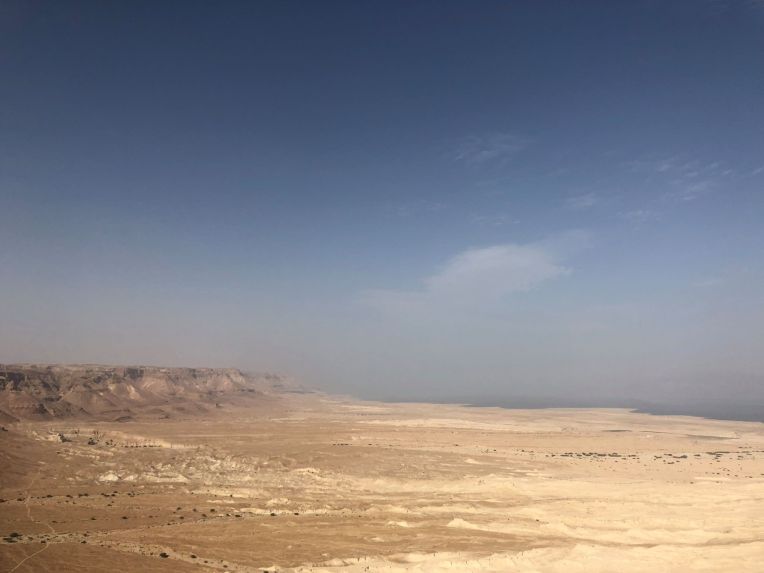 For travelers to Israel, the Dead Sea shouldn’t be missed. If you’re interested in history, then Masada is a must visit site as well.